Eighty years of the Jaguar name means eighty years of iconic design. We’re tracing just a handful of our key design moments from the past eight decades. Today’s Jaguar family wouldn’t be the same without them.

Part one sees the early years of evolution from 1935 until 1959. We start with the very first Jaguar model and travel through to motorsport success and the creation of the pioneering sports saloon segment. 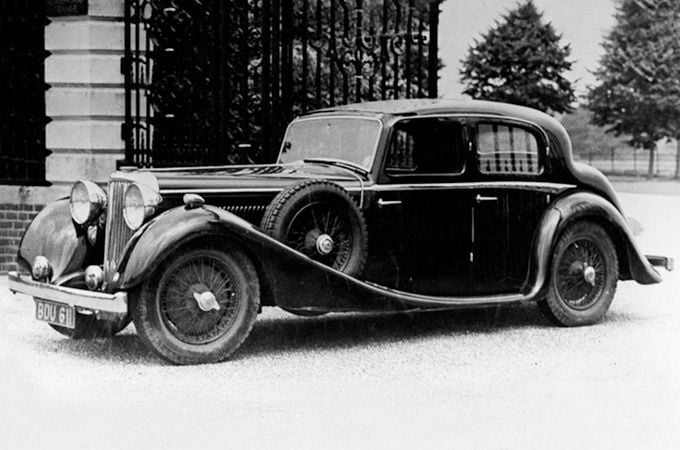 The first car to bear the big cat moniker was the 1935 SS Jaguar 2.5l Saloon. It was produced under the Swallow Sidecar name, the company first set up under William Lyons and William Walmsley in 1922.

The 2.5l Saloon was one of the most distinctive and beautiful cars of the pre-war era, with its sleek, low-slung design. It needed a new name to reflect these qualities, one that summed up its feline grace and elegance with such a finely-tuned balance of power and agility. The big cat was chosen, and the SS Jaguar perfectly justified the analogy.

Due to the notoriety that the SS name had acquired during the war, the evolution to Jaguar seemed like a natural one and the name became company-wide in 1945. The Jaguar marque was born. 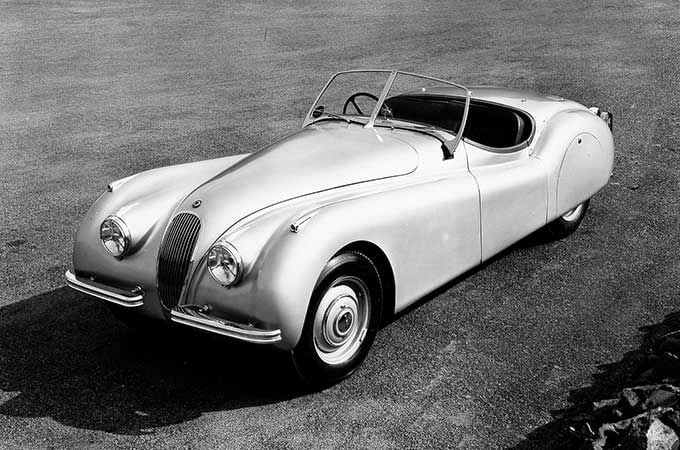 Designed in just a few short months by William Lyons, the XK120 went on to become an icon. It created not a stir, but a sensation.

This was Jaguar’s first sports car since the SS100 had ceased production in 1940. With swooping fenders running the length of the car’s body, the XK120 was dramatic through and through. The low, flowing lines reflected Lyons’ love of motorcycles, and may have drawn on the aircraft design techniques he came to know during wartime.

The XK120 also introduced the vertically ribbed oval grille, which became a Jaguar signature over the next two decades.

The XK120 was both a design exercise and a test-bed for the new twin-cam motor – which itself was so successful that it would inform road-going Jaguars for over forty years. 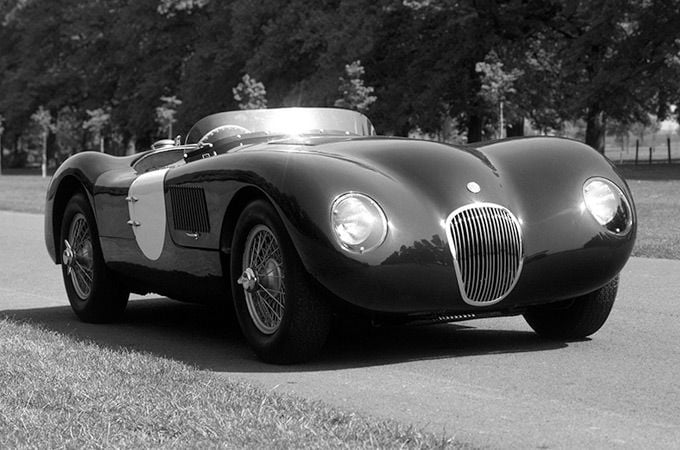 C‑Type was undoubtedly one of the most beautiful racing cars of its time, if not of all time. William Lyons shrewdly realised the positive publicity that a pure-bred Jaguar racer could bring to his fledgling marque, and so work began in 1951.

Aerodynamicist Malcolm Sayer was the man behind C‑type’s fluid shape, which channelled his experience from the aircraft industry. Thanks to Sayers flair for lightweight design, C‑type also weighed around 25% less than the XK upon which it was based.

Perhaps the finest moment in the C‑type’s history came at Le Mans. It won in 1951, but 1953 was undoubtedly its best performance. With lightweight bodies and advanced disc brakes, the C‑types proved almost uncatchable – finishing first, second, fourth and ninth.

The D‑Type, with its signature tail fin, was the first to use monocoque construction – that is, borrowing techniques from aircraft design.

Aerodynamicist Malcolm Sayer was once again responsible. He used advanced aerodynamic principles to make shapes that were sensational yet slippery and lightweight. Monocoque construction, still used in motorsport today, was an integral feature of the D‑type. This entails a central ‘tub’ in which the driver sits, with the major mechanical components nestled in the front and rear sub-frames.

The fluid shape of the D‑type was born from many hours in the wind tunnel, adhering to Sayer’s principle that form followed function. The oval air intake, the sweeping bonnet, the half-faired rear wheels, the distinctive and stabilising tailfin – these conspired to make one of the most beautiful competition cars ever produced. 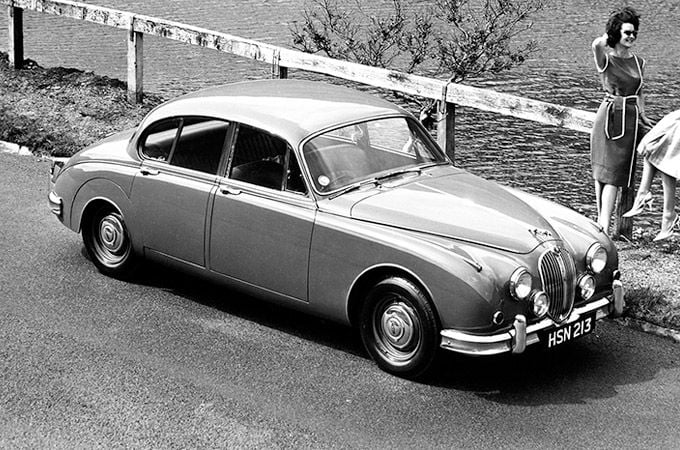 The Mark II was an evolution for the sporting saloon segment. It took the Mark I – first produced in 1955 – and refined the design even further. Inspired by the success of the D‑type, the Mark II was similarly stiff and had sub-frame mounted suspension. It also included the now legendary straight six engine in 2.4, 3.4 and 3.8 litres.

The Mark II demonstrated that William Lyons had lost none of his design deftness. Working from the 1955 Mark I, he replaced the thick metal door frames with slim chrome surrounds and increased the size of the front and rear screens. The interior was light and airy – and ahead of its time. 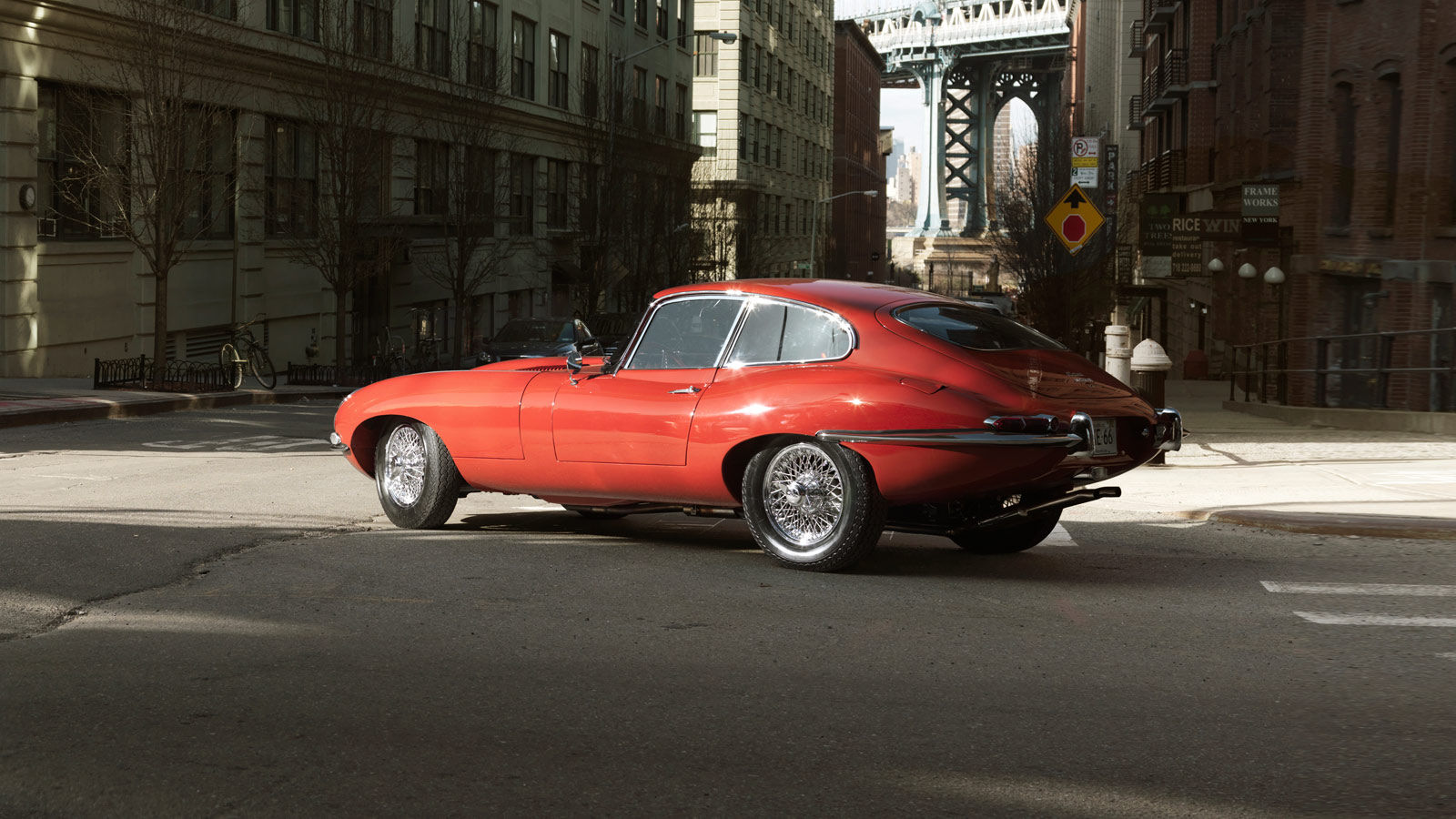